Why Is This Flash Head So Unusual?

I've recently been loaned, for review, a pair of Strobeam DL250 flash heads. These are quite an interesting product. They're 250W, exclusively battery powered heads but they use the same switching mechanism as a hot shoe flash gun, the technique of electronically switching off the power to the flash tube when sufficient power has been delivered. This, much like the Strobeam G5 head, means that as the power setting of the heads is reduced the flash duration gets shorter, so excellent for stopping high speed action.

Also as a repercussion of using IGBT switching one of the spin off benefits is that as the flash power is lowered, less energy is taken from the capacitor storage bank which in turn means the recycle time is much quicker so if the power is wound down then potentially the firing rate goes up. From what I can see of the specs of these units you should use FP mode to achieve this. FP mode is quoted as reducing the flash power to 1/16th of full power (16W/s) but the claim is you can fire the flash 9 times in one second. That certainly opens up a few options that would be difficult to achieve by any other method!

I'm not going to go into too greater detail in this review because so much of the functionality, user interface and specification of this head is similar to the Strobeam G5 head which I've reviewed in a great deal of detail here G5 Review

These heads are tiny, the body is about 80mm on each side and the fixed reflector sticks out the front by another 100mm or so, each head weighs about 900g and the battery pack that can drive two heads at the same time is another 800g or so. So this is a very lightweight, portable field solution.

The build quality is very good, they're small and solid. The body casing is all metal, the rear of the flash is made of a robust looking plastic. There's a glass tube that sits around the flash tube to protect it from knocks. These heads do not have any form of modelling light. The display is big and bright but has a horrible viewing angle problem. If viewed from below it is crystal clear, if viewed straight on it's still OK but you only have to go 20 or 30 degrees above it and it's completely unreadable. This is unfortunate and could be very annoying if you make a habit of mounting your flash heads very low to the ground. In fact I'd go as far as to say if you were often in this position the remote control that Strobeam make for these heads would become a necessity rather than a luxury. The head angle adjustment is done with a wing nut type adjustment which was pretty easy to use. There's an umbrella holder built into the base of the flash which is angled such that an umbrella can be fitted with the standard reflector in place. The standard reflector, that’s only about 120mm across, is removable but I’m not sure what range of modifiers are available to fit these heads I can’t see anything available on the Strobeam website and I don’t think it’s a standard fitting, I guess the assumption is that they’ll mostly be used with the standard reflector. There is a 1/4 inch socket for a remote flash trigger but I’d recommend using the Strobeam remote flash trigger.

The rear panel controls aren't immediately fully intuitive but when you realise that you push the flash power adjustment knob to toggle through the menus it's pretty easy to use and you can access everything that you'd want to in normal use from that one adjustment knob which is a simple and effective user interface.

These heads use the same remote as the Strobeam G5 and you'll see from that review that I really like the remote.

Reliability is obviously an unknown at this point and I don't believe Strobeam have a UK service centre as of writing.

Here are one or two photos so you can get an idea of the build quality and user interface. 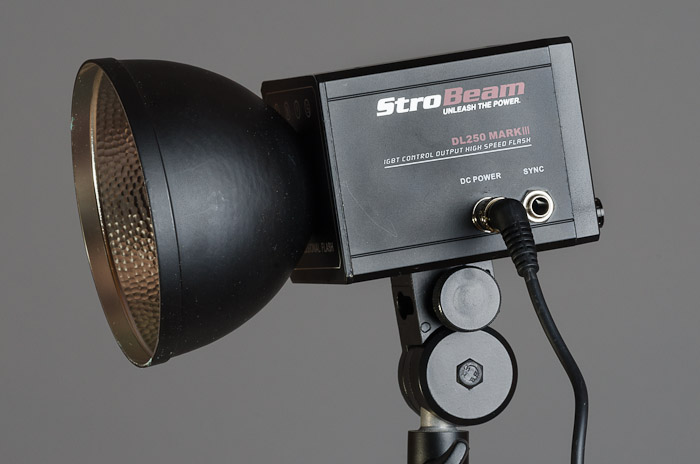 Side view of the head 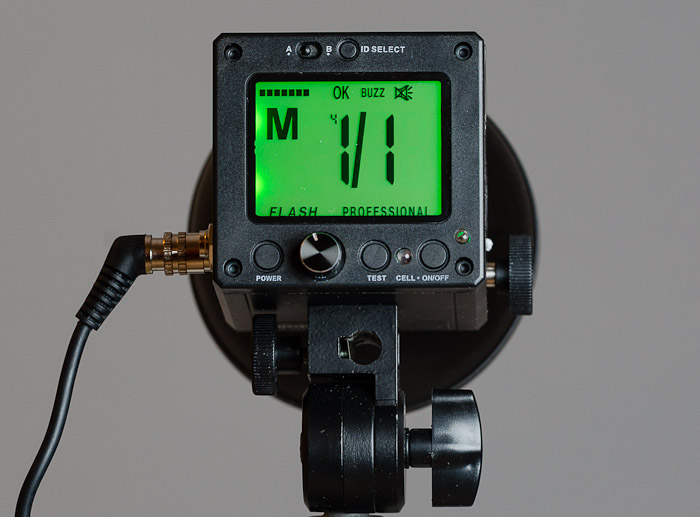 On to the more technical aspects of the flash head. The first thing I measured was flash accuracy at the various settings i.e. if you reduce the power by 1 stop does it actually half and also is the flash head delivering the expected flash power? One of the problems with flash heads is they're always specified in terms of the W/s (Joules) that they deliver into the flash tube, this is not however necessarily proportional to the light output so it's not a great way of defining flash output power. Where as guide number is a direct measure of light delivered by the head.

The linearity of power delivery as I ran though the range of the head 1 stop at a time was very good, it gives just a bit more, 1/3 of a stop maybe, at 1/64th power than it ought but considering the amazingly brief flash duration of almost 1/20000th of a second at that point I think that's probably a good thing and at that level it could well be my measurement error anyway.

The next test I did was colour consistency. I did this by looking at the raw files taken on a neutral grey background using the eye dropper tool in Lightroom to sample the RGB values, they range from 0 to 100. I've also converted this into Kelvin white balance as that's probably rather more meaningful to most people. The DL250 pretty much does what I'd expect which is to go progressively more towards the blue end of the spectrum as the power is turned down. This happens because as the flash duration is reduced the tube burns at it's hottest for the entire duration of the flash unlike at full power where it starts very hot but as it goes into the tail of the discharge characteristic it burns cooler and therefore giving a warmer light. There is quite a shift of white balance here of about 850k at the lowest setting but at 1/32 power it’s only moved 600k which although notable wouldn’t worry me particularly.

This time the performance is very good. Down to 1/8th power there’s virtually no measurable colour shift at all, below that there’s a very slight shift towards the blue, which is exactly what I’d expect from a head of this type. Even at 1/64th power I’d say this is absolutely nothing to worry about, it’s barely perceptible on a full screen image so it’s highly unlikely that it would ever be a problem when using two, or more, flash heads at different powers.

The final test is flash duration. In this area the DL250 excels. Although it's pretty pedestrian at full power (1/250th second) at half power and below it gets fast and indeed very fast at 1/64th power delivering a flash duration of almost 1/20000th second.

I've shown here oscilloscope waveforms of the output power at the various settings so you can see how pronounced the reduction in flash duration is, to the point where the 1/64 (4W) flash pulse is so small you can barely see it.

Note: The flash durations are shown in ms and in brackets as fractions of a second

This is good, the flash is delivering exactly what it claims to and what's also good is that FP mode seems to be largely irrelevant, its flash duration and power delivery is no different to the 1/32 power setting. So the upside to this is that if you wanted a bit more power you could use the head at 1/16 power or indeed 1/8th power and still get very short flash durations still only 1/3600th second at 1/8th power. I did try firing a burst of shots at 6fps and the head could manage 5 shots at 1/8 power before it missed one.

Below are a series of photos taken of a rotating disk at flash settings from full power down to 1/64th power in one stop increments. You can see how pronounced the variation in flash duration is, from not being able to see the numbers on the disk at all to them being almost completely sharp.

The flash recycle times are OK at full power, about 2 seconds, but because of the nature of this type of flash they just get quicker and quicker as you reduce the power so at 1/2 power it's about a second and thereafter it's immeasurable but in practise would be about 1/2 second at 1/4 power, 1/4 second at 1/8th power and so on and so forth.

I said one of the other desirable attributes is ease of use. As digital interfaces go this is definitely one of the better ones because there's very little navigating around menus and there is a knob to adjust flash intensity. The big Achilles heel, as I mentioned earlier, of this head is the LCD display viewing angle issue. If you mount your heads lower than head height or angle them upward you won't be able to read the display without getting on your knees or using the remote control. Did I mention the remote control? It's great, I really do like it and I do think it's very well designed with the exception of it being unable to remember the settings for multiple heads on different flash IDs. It's also a 2.4GHz flash trigger that can fire the flashes at high burst rates unlike my existing radio triggers which skipped every other frame at 6fps. So I'd say if you're going to buy these heads I'd definitely buy the remote to go with them. Strobeam claim it will trigger the heads from up to 100m but I've not tried that and it seems fairly unlikely that it would often be a requirement

As this is a battery only flash all of the measurements taken have been on battery.

So what's the conclusion? Well these are great little heads and they have very short flash durations at low power but then so do hot shoe flash guns and they're of a similar power. These have more of a standard studio type user interface than a hot shoe flash gun but at £500 including the battery I think you'd have to be sure of your reasons for buying these as a solution. There are other slower flash duration solutions that are a similar price and deliver 2 stops more light too so I think you'd have to have a very specific requirement to want to buy the DL250s, as nice as they are. The determining requirement, as with the G5 head, is whether you need either the fast burst rates of 6fps or higher or the action freezing capability of these heads and they really do have exceptional action freezing capabilty.

I should point out, in the manner of full disclosure, that I have no affiliation with Strobeam I offered my expertise to review the G5 heads and they accepted. Equally I'd be happy for them to use this review to tout their products as it contains information that I would have found very useful to have had access to when I was trying to decide what route to take for updating my studio heads.

By trade I’m an electronics design engineer hence the quite technical nature of this review. I like to know exactly what a product delivers so I know how I can rely on it and how I can use it. I hope this review is of assistance to anyone else who is considering buying one of these heads